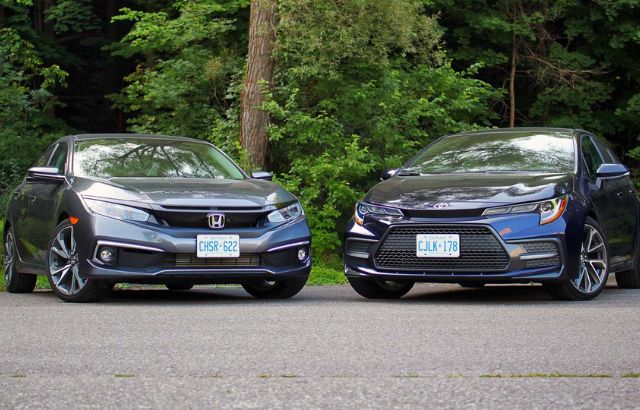 People buying their first automobile are looking for a car with the proper size, affordable, and designed for compact and comfortable cars. However, fewer vehicles have changed the situation. Here is the guide on Honda civic vs Toyota corolla.

Two inexpensive, effective compact sedans from manufacturers with a well-deserved reputation for dependability are the Honda Civic and Toyota Corolla, which are natural rivals. Toyota recently announced the newest Corolla for the 2020 model year, but Honda recently discontinued the 11th-generation Civic for 2022. Continue reading this article to find out each feature and its drawbacks.

The Honda has a revised interior and focuses on a more comprehensive package, even though both cars belong to the same class. On the other hand, the Corolla has additional passenger space in the backseat and a fantastic hybrid choice that is excellently fuel-efficient. Check out the article’s major elements now.

Overview of the 2022 Honda Civic

Honda has raised its game for the 2022 Civic with much-appreciated contemporary changes. The Civic inline turbocharged engine helps in its rapid acceleration, and its lightweight steering wheel facilitates handling. Let’s examine some more Civic advantages and disadvantages.

Overview of the 2022 Toyota Corolla

Honda still faces fierce competition from the Corolla, which offers some benefits over the Civic. The hybrid model, which gives up to 53mpg, is the most obvious choice for drivers on a low budget, but there are other options as well. The roomy back seat will be more comfortable for your passengers, but it will be less pleasant. Let’s go through some additional benefits and drawbacks of the Corolla against the Civic.

Read More: Can I Put Premium Gas in My Toyota Corolla

Honda produces a variety of cars, including the Civic, which is intended for individual or family use. This series of the car sells in thousands each year all around the world.

The manufacturing facility for this automobile is situated in Indiana, USA. The most recent model in this series satisfies every demand the modern consumer makes, including those related to technology, comfort, performance, etc.

On the other side, Toyota makes the Corolla in Mississippi, the United States, one of the most popular vehicles on the planet. Eleven additional generation models were developed after the 1966 release of the first generation model.

The newest model has many safety features not found in other vehicles in its price range.

The wild revolution of the preceding generation reduced the clean look of Civics. Although polished, it doesn’t take away from its allure. This is particularly true of the interior, where a metal filigree strip covers the vents and lifts the interior’s straightforward design.

It’s a complete role reversal, yet the Toyota is constructed with flares and fillers that don’t strain the eyes, unlike the C-HR; its inside is no longer a Romantic shelter (Since there isn’t a direct Honda rival for the Corolla hatchback.)

The Corolla is superior to the Civic in one important way. The standard Corolla Hybrid has a 169-horsepower inline-four engine, but it takes the Prius’ efficiency and disguises it in a more conventional Corolla body. Given that the Corolla Hybrid gets an EPA-estimated 52 mpg combined, people feel comfortable with its modest acceleration. It’s still a pleasure to drive, never bumpy or heavy, even though the steering and steering feel less fluid than the Civic.

The hood of the Civic is a more powerful 1.5-liter inline-four turbocharged engine that produces 180 horsepower and has a 0-100 km/h acceleration time of 7.4 seconds. On the other hand, the Toyota Corolla’s 2.0-liter inline-four has a normally aspirated engine and makes 169 horsepower with a 0-60 time of 8.2 seconds.

How much does it mean to pay to purchase a Honda Civic versus a Toyota Corolla?

What distinguishes the hybrid Toyota Corolla from the hatchback model?

A bigger engine is standard on the hatchback and sporty sedan variants. The hybrid Corolla is only offered as a sedan. The Corolla’s base engine generates 139 horsepower and achieves fuel economy ratings of 30 mpg in the city and 38 mpg on the highway.

What distinguishes the Toyota Corolla 2023 from the Civic?

The 2023 Civic, in contrast, is predicted to get up to 33 mpg city/42 mpg highway. The Corolla and Civic have several safety and support systems and are exceptionally safe cars. Both tiny cars received the highest IIHS rating, Top Safety Pick+, for the preceding model year.

In 2022, which car should you buy: a Honda Civic or a Toyota Corolla?

The Civic emphasizes size, technology, and performance in its redesigned 2022 model, while the Corolla emanates driving assurance, simplicity, and compactness. Although they belong to the same compact car sector, they are somewhat opposed. But just one is of considering financially.

While the 2022 Honda Civic offers a more refined driving experience with a supercharged turbo engine, a better touchscreen, and a great safety package that makes maintaining lane compliance simple, both vehicles offer excellent value for the money. However, you can locate a 2022 Corolla Hybrid at a competitive price if fuel economy is your top priority.

These two compact automobiles are both worth checking out and driving. At first glance, the 2022 Honda Civic appears to be the winner in this comparison. On the other hand, the Toyota Corolla is less expensive and more trustworthy, which can affect your decision.

How to Fix Faded Paint on Car | Step-by-Step Guide

How Far Can a Concrete Truck Reach | 3 Types Distance Explained

Courtney D. Sanderson - March 9, 2022 0
You may hear the name of concrete trucks, the heavy-weight vehicles that can transport concrete from the batch plant where they load cement and...

Is a Tesla Faster than a Lamborghini | Reasons Explained by Expert

Courtney D. Sanderson - April 20, 2022 0
Tesla is one of the most prestigious automobile names in the industry. Its technological prowess, leading functionality, and excellent energy storage contribute to its...

Courtney D. Sanderson - January 27, 2022 0
Title Max is the leading provider of title loans. Title Max finds your car by utilizing a GPS, determining where your vehicle locates. Once...

How to Check Compatibility of Car Parts | Step by Step Guide

Courtney D. Sanderson - February 4, 2022 0
Vehicle owners have the option of visiting a junkyard, swap meet, or dealership to find the right components. In addition, they can search the...